Creating an animatic is easier today than ever before. All you need is a storyboard and the right software. This will usually be the video editing program that you already have in use. Or, if available, the video software with which you create animations.

Animatics are animated storyboards. The individual images are imported into an editing program and cut together with the correct timing and tempo of the later video and underlaid with sound effects, dialogue and music. Here you will find everything you need to know about it.

If you are planning to create an animatic, you should set the course for it when you draw the storyboard.

Concretely: you have to make sure from the beginning that the drawn pictures of the board are available in sufficient size. DIN A3 is perfect, often A4 is already sufficient. This per image. Not per page storyboard. This is the only way you can zoom in or out and imitate panning without qualitative problems. This is also the reason why you never want to get the settings from your storyboard artist for the animatic only as close-up or close-up.

It is helpful to have the individual pictures of the storyboard already delivered in digital form (at least 1920 × 1080 pixels). This saves you the tedious scanning of images and allows you to import the image material directly into your editing program for creating animatics without any loss of quality.

For a TV spot of 30 seconds duration, you will receive between 8 and 12 individual pictures (settings), always depending on the story and the planned narrative style. Whether in color or black and white is a decision that depends on how realistic the simulation of the later video is to be. 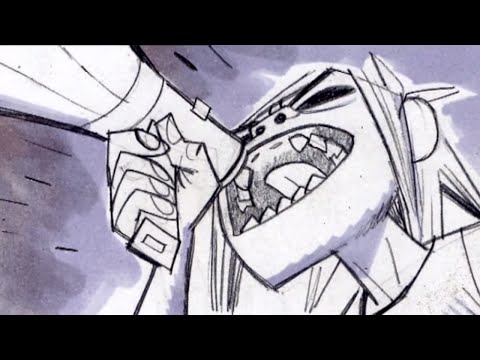 Why an Animatic at all?

There are three alternatives to creating animatics that you need to know:

Which kind of pre-visualization you choose depends on the size of the future project. And about how easy it is to present the idea to decision-makers. The question you have to answer is: How can I inspire and convince the decision makers that the chosen path is the best possible.

Which software to use to create animatics?

You’re spoilt for choice here. Every program for video editing is basically suitable for this purpose. You can also use various free software to create animatic.

The same rules apply as for video editing. You want enough memory, a nimble graphics card and the ability to display the finished animatics in different formats (ideally as H.264 MP4 or MOV).

You can use Adobe Premiere. If you’re one of the lucky ones who subscribed to the Creative Package from the same manufacturer, you can access Adobe After Effects at no extra cost. This is not only the program of my choice. It is also the favourite of companies that have specialised in creating animatics.

More important than the type of software is that you can handle it. Your energy and concentration must be focused on the content. Do not focus on the technique or on squeezing out questions about how you can solve this or that with the program.

Not recommended is software that animates a storyboard from ready-made elements, such as Viddyoze or Animatic.io.

While these programs are very easy to use (you drag and drop an element, say a child, and move it to the right place against the background of the house, which you also get as a template), each of these animatics are almost identical in look and feel. That can’t be the target.

You don’t just want to show the client that you know something about framing, montage and storytelling. The type, the very individual style of the commercial, is also extremely important. That’s why you need individual, specially created images as a basis for a professional animatic.

Sound is half the battle. At least!

The image layer is one thing in the production of animatics. Just don’t forget the sound. By that I mean sound design, music, off-voice and similar things. These have a greater emotional impact than one might think.

At the same time, the effort involved in the creation of sound design or even a music layout by the later composer is absolutely acceptable compared to the drawing and animation of the images. Especially since here – attention rights of use! Also the use of copyrighted music in Animatics is commercial! – also let you license an endless number of templates for little money.

About Pavel Sokolov 36 Articles
Pavel studies film editing. He likes François Truffaut, Terrence Malick, Dr Pepper, his Thermaltake View 71 TG, music by Seeed and all things related to the color red but not causing pain to any living creature.

In the second part of the series, FILMPULSE introduction to video technology explains the advantages and disadvantages of the most popular video formats. In addition, questions of conversion (the transformation from one video format to another) and other important topics from the everyday life of the video and filmmaker will be discussed. [more…]

„Booom!“, „Wham!“: When Pork Belly and Storytelling Collide With in TV Commercials

In the Head of the Editor, or How to Cut a Feature Film in Public, Being a Director

The successful editor Sven Pape from Burbank, USA, edits his films publicly. He uses YouTube and Patreon. In an interview, he explains together with director Udo Flohr how postproduction works in his film projects. [more…]

Animate Photos for Video: The Secret of Kinestasis, 2.5d and Parallax

How to integrate photos into a video? With the parallax effect you can create very attractive videos from still images, which can compete with any imagevideo and product video in the world. [more…] This article [more...]