It has been a long time since a film from Switzerland has shown so much international format. “Bruno Manser – The Voice of the Rainforest” contains everything that great cinema and audience success needs: suspense, contrasts, a real heroic figure with a mission, a strong reference to current issues and a script that skilfully uses longing as a projection screen for emotions.

»Bruno Manser – The Voice of the Rainforest«

There are films that manage the miracle of sucking the viewer in unexpectedly! “Bruno Manser – The Voice of the Rainforest” is one of those works. Admittedly, this does not succeed from the first scene on. But just in the moment when you ask yourself if the clichés the exposition works with are too strong, you are done for.

The main actor Sven Schelker has a lot to do with it. One can justifiably claim with him: this person does not play. But he is.

Bruno Manser, who he embodies, is a Swiss environmental activist who disappeared during the fight for the rights of the indigenous Pena 2000 in Malaysia and was declared missing in the Malaysian rainforest by the authorities five years later. Sven Schelker plays Bruno Manser in an almost frightening way. It begins with the fact that he speaks the majority of the film in the language of the indigenous people. And goes hand in hand with a physical presence that makes the actor one of the very few great Swiss acting talents.

Anyone who produces a feature film like this puts on big shoes.
Zachery Z.

Schelker is not afraid to take a back seat in the really big scenes to such an extent that his emotions radiate onto the big screen, so to speak, from within. One can blame the script and director Niklaus Hilber for these great moments. But anyone who does so has misunderstood the essence of this feature film.

“Bruno Manser – The Voice of the Rainforest” is neither a documentary (there are already three documentaries about Manser’s life) nor a typical auteur film. Director Niklaus Hilber honestly reveals this right at the beginning: The flying camera over the rainforest already shows in the first shot the visual violence with which this magical work will take us on a time travel through the life of Bruno Manser.

The prophet in his own country

Sure, there’s the obligatory love scene. Correct, it conjures up the noble world of primitive peoples in the rainforest as a contrast to the consumer-oriented western elbow society. And yes, not only the camera work is impressive, also the soundtrack by Oscar-winner Gabriel Yared (Out of Africa) is bombastic. It’s probably due to my dysfunction and yet it’s been a felt eternity since I last felt the desire to own film music as a memory in German-speaking cinema! 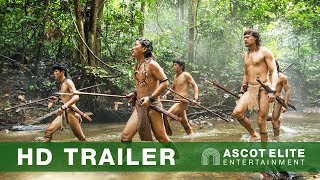 It’s simply stupid who accuses the film of having a colonial perspective because of its audience appeal. This is partly what happened in newspapers after the premiere at the ZFF Zurich Film Festival. Even if Bruno Manser wants to protect the Penan people from the influences of modernity in this feature film, as he has tried to do in his life, he is not doing so for selfish motives. And only begins to do so after he has lived for months with the Penan in the jungle. Which is something that none of the men who see tropical timber as an economic commodity can claim. To claim indirectly in a film review that every nation has the right to subjugate its own minorities without having to account to the rest of the world is a relic from the last century and only one thing: reprehensible.

Who are the Penan?

The Penan are an ethnic group on the island of Borneo, which belongs to Malaysia. It has about 10,000 members. Until a few years ago, the Penan lived as nomads in the Malaysian jungle and knew no property and hardly any hierarchies. Their preferred weapons were blowguns.

It is also cynical to want to take away the power of this film with the argument that it fits too perfectly to Greta and the current climate fears. More than two years ago, when the screenplay for “Bruno Manser – The Voice of the Rainforest” (the development of which did not happen overnight) won the IWC Award at the ZFF, Greta Thunberg, then thirteen years old, was still an unknown, pimply schoolgirl from Sweden who could not have guessed what she would trigger in August 2018 with her sign in front of the Swedish Parliament in Stockholm with the inscription “Skolstrejk för klimatet” (“School Strike for the Climate”). Show me a producer who knows today what will be a global issue in three years – and who will get his film financed and baked!

My visit to the cinema in Zurich was a spontaneous decision. So I didn’t have enough time before my onward journey and editorial deadline to ask the makers of the film for answers to my questions. I would have liked to know why the stylistic device of off-commentary was considered necessary. Was this already part of the script? Or a decision that was made during the editing?

I am similarly interested in the dramaturgical intention behind a parallel montage in slow motion? It briefly reminded me – I don’t like to admit it – of the unfortunate ending of another Swiss film I watched in Zurich at the beginning of the year: “Zwingli – The Reformer“. This work was allegedly similarly expensive to produce. Nevertheless, “Bruno Manser – The Voice of the Rainforest” can in no way be worth the holy water. Because the first movie only claims. And the second one breathes.

While we’re at it, to look beyond the end of our noses: Where the failed Swiss Oscar nomination candidate “The Awakening of Motti Wolkenbruch” by wunderkind Michael Steiner dramatically (incomprehensibly!) collapses in its second part, “Bruno Manser – Die Stimme des Regenwaldes” continues to increase in intensity from the middle of the plot. Steiner may be the more experienced, elegant narrator. But as part of the script, the characters always remain a means to an end. It is different in Hilber’s films: his characters enter our lives. In my experience, walking only happens when a director enters into a deep relationship with them.

This film has everything that makes a good film. And even more!
Zachery Z.

Anyone who produces a feature film like this puts on big shoes.

Hollywood as a model for “Bruno Manser – The Voice of the Rainforest”?

Remember Jeremy Irons and Robert De Niro in “The Mission” (1986) by Roland Joffé. Or “The New World” (2005) by over-director Terence Malick.

I suppose the scene in which Sven Schelker climbs a waterfall in a breakneck manner is a deliberate reference: Jeremy Irons climbs a comparable waterfall in “The Mission” as well. His character, a Christian missionary, basically wants to do the same thing as Manser: to erode civilisation, or what we think of it.

In the same way, “The New World” deals with the decline of environmentally friendly ways of life. But unlike in “Bruno Manser – The Voice of the Rainforest”, here Colin Farewell takes his new love, Pocahontas, back to his homeland. Where, consequently, she dies.

Both films are big Hollywood movies. However, they can’t claim to have any relevance to the present, as Niklaus Hilber’s feature film does. The plot of these reference films is fictional and, moreover, is set far in the past.

There is hardly a film from Hollywood today in which the (therefore largely ineffective) delicacy “based on a true story” is not slapped around my eyes at the beginning! It speaks all the more for “Bruno Manser – The Voice of the Rainforest” that this feature film does not do just that.

Where other films refer to authenticity and yet, with reference to the dramaturgical requirements of a feature film narrative, don’t take the facts so seriously, “Bruno Manser – The Voice of the Rainforest” focuses on authenticity.

Director Niklaus Hilber has understood that truth in film can only ever grow from feelings!

Writes another chapter in the success story of Pixar and Disney: “Soul”, the new animated film from director Pete Docter. The film is a declaration of love for life and is one of the best three cinema films of the last two years. [mehr…]

Question to Dr. Film: Who decides on the choice of an actor’s role? The actor himself? Or his agent? And what is the manager of an actor in the film business responsible for? Here you will find the answers. [mehr…]

“Done with Fake” by the singer Jaël, realized by the Swiss director Luki Frieden, is convincing at first as well as second and third glance. In an interview with Filmpuls, Jaël and Luki tell us what’s behind it. [mehr…]

With their company Dedicam, Dionys Frei and Davide Tiraboschi are regularly at the forefront of Hollywood. Their drones set standards in the production of Michael Bay’s blockbusters. In this exclusive interview with FILMPULSE MAGAZINE, Davide and Dionys share the secret of their amazing careers. [mehr…]

The successful editor Sven Pape from Burbank, USA, edits his films publicly. He uses YouTube and Patreon. In an interview, he explains together with director Udo Flohr how postproduction works in his film projects. [mehr…]