The corporate film is one of the most common forms of commissioned production. However, it is also a genre that requires a much higher level of expertise from the filmmaker compared to short clips and other forms of video production. Here you will find the most important points of what makes a successful image film. This is in the form of a practice-oriented checklist.

Here you will find a checklist with 7 criteria you have to pay attention to when creating, planning and producing an image film. They make your video successful.

Checklist with 7 points a successful image film has to consider

Our list is aimed at advanced users. It doesn’t check to see if your camera’s focus is correct. Or if you’ve got your storytelling down pat. But it ensures that the video producer and client are thinking “outside the box.” Because this ensures a successful image film.

If you take the following seven points of our checklist into consideration, you can trust in the above-average success of your image video.

Understanding by all parties what an image video is and can do?

It pays to take a close look at the briefing: many image films have to solve problems at the company level that are the responsibility of the client. It is not the business of a video to define strategic issues as part of its creation! Or to clarify the interpretation of individual values. Or responsibilities and organizational competencies.

A successful image film focuses on the brand values. At the same time, an image video does not usually show products. The focus is always on the competencies, employees and values of the company portrayed.

Structural and organisational problems on the part of the client must not be clarified during a production. This is where a clean helps. The commissioning company prepares this internally in advance of the contract tender.

Authenticity and credibility as the basis for a successful image film

An image video is always and without exception a mirror of the client. If this person does not live his values or claims unique selling propositions that do not exist in reality, the image video fails.

The viewer, and likewise the client’s customers, possess – just like the market – an extremely fine sensorium for the truth. One will immediately and instinctively notice when there is “flexibility” with the truth in a video. This is one of the basic requirements for a successful image film.

A budget appropriate to the task?

Erich Kästner wrote in the “35th of May”: “Admission free. Children half.” When it comes to image video, that principle doesn’t work. Video productions cost money.

Of course, it is the producer’s job to achieve the greatest possible impact with the least amount of resources. But even the best producer can’t work magic.

Where there is no money for talent, it’s only a small step to a nailed-together corporate video. “If you pay with nuts, you get monkeys,” says an American proverb!

A movie for everyone is like shooting a shotgun into the blue sky. Maybe something will fall to the ground. Whether it is a swan, a mosquito or a Delta flyer cannot be predicted. That is why this cannot be a principle for image videos. Because if you don’t know your target audience, you can’t make them happy.

A core message that touches the viewer emotionally?

First, it must be clear what is to be said. An image video can only convey one main message. All other messages must be subordinate to this and must be in context with the core message. This must already be taken into account in the video concept.

Second, a video is not an Excel spreadsheet. Moving images are justified when they convey more than just information. Movies and emotions are twins. They should go hand in hand. Anything else is a missed opportunity.

Existence of a well thought-out strategy for distribution?

No image film finds its audience just like that. Without a coordinated and sophisticated strategy, nothing works in dissemination today. Not on social media, not on YouTube, not on your own website.

Therefore, for a successful image film, not only the actual film production, but also the marketing must be backed by a solid budget. 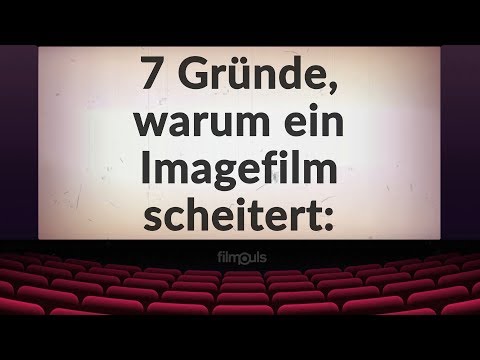 Consideration of the views of key stakeholders?

As always and everywhere in communication, half the battle is to look at one’s work from different angles. No company has only customers. Employees, suppliers, competitors or environmental associations may have their own, completely different view!

The more precisely all interested parties are outlined, the more precisely any (positive or negative) reactions can be assessed. And – more importantly – avoid them in advance. Big data, empirical values and market research help here.

Checklist: Summary of the checklist “Successful video film” as a video

Evaluate, Plan and Implement Corporate Films With the 6-Phase Model

Customers and consumers expect attractive communication from companies. For companies and their films, this means making sure all the important questions are asked. The 6-phase model for corporate films enables you to do this. [mehr…]

Checklist for Casting Extras and Actors for Film and Television

This article uses simple checklists to explain what to think about when looking for actors and extras for film and television. He points out what to do in order to conduct your own acting auditions. [mehr…]

The analysis of a film or video has its own special charm: it opens up a direct view into the director’s brain. At the same time, it helps you understand a feature film or series [mehr...]