Easy on the eyes. Difficult to design. This is especially true in the case of commercials. Because every second counts here. And as we all know, it’s easier to add content than to leave it out. But only if you can do that will you succeed.

Everything is everything and mixes together. This also applies to commercials. Before the Internet, this meant only commercials for cinema or TV. Today, the term is defined more broadly. What has remained is the claim to bring a statement closer to a broad audience in as short and concentrated a form as possible.

Wherever advertising time has to be bought at high prices for distribution, the length of a commercial is an issue. As a rule, payment is made per second or even per individual image (so-called frame, one second is divided into 25 frames on TV).

The longer the commercial, the more expensive the advertising time to be bought. Five seconds of additional film length can quickly add up to six figures in additional costs.

The film length for a commercial is therefore a constant consideration. When is the spot so short (too short) that it can no longer fulfill its mission?

In the sixties of the last century, due to the triumph of TV, a genre of its own emerged in a short time from the compulsion to get as much as possible under one hat in as short a time as possible: the TV commercial – often referred to in the industry and by agencies as TVC (which is the abbreviation for TV Commercial).

However, the compulsion to concentrate on the essentials is not only due to the costs. Even where the budget plays only a minor role, there is a perceived maximum length for the genre of TV commercial for the audience. If the length is above that, the viewer switches off.

Therein lies the challenge and the attraction for the creation. The trend towards ideation does not change this. She has to find a solution how to stimulate the viewer’s imagination in a few seconds. Checklists such as AIDA, GIULIA or DANIELA help with this.

The art of the commercial genre therefore lies in reducing it to the essentials. And because the omission in every art has always distinguished the master, spots are rightly considered the royal class of commissioned productions.

This is where creative ideas find their masters.

Even more than usual in this genre: No showreel, no job. If you’ve got it, you can have it again. Everyone else doesn’t! There is enough risk anyway, so confidence is the most important currency in spot production.

The majority of clients are therefore looking to work with professionals. People who have already distinguished themselves in comparable tasks. Anything else is a risk. Why? Because it’s not just about the commercial. But also about distribution. And the distribution concept is usually in turn integrated into the overall marketing mix.

In short, it’s an obscene amount of money that someone has to answer for. When the commercial goes to shit, it takes everything else down with it.

At the same time, this also means: If you, as a client, are given just enough money by your boss for an advertising spot, but not the funds to place it on TV or the Internet, then you’d better have an online banner or a print ad produced!

The classic sale (in the highest perfection): 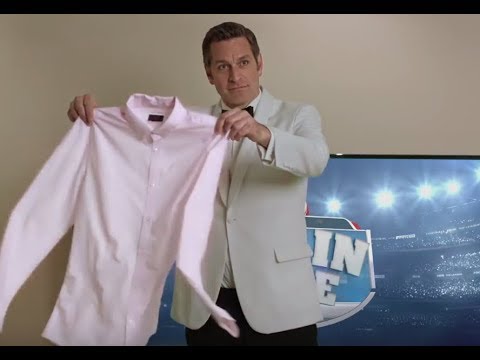 The commercial as a resolutive 2-act dramatization: 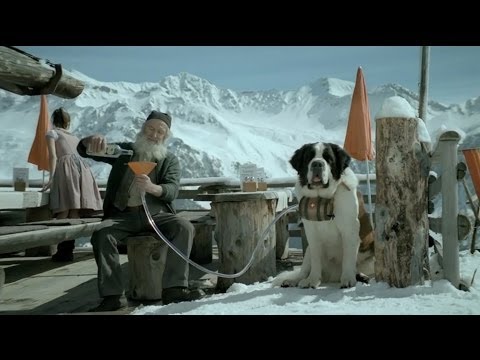 On a side note, the Persil commercial also illustrates the super-mega-over trend that will keep the world buzzing for years to come. Namely, the smart linking of the real world with the digital world. Because computers, unlike people, don’t need detergent.

Whether this message was ingeniously subliminally planned into the storyboard, or slipped in unconsciously during the creation process, could not be ascertained. But it will probably be a while before actor Peter Hermann steps out of the flat screen at home in real life or as a hologram.

Where authenticity bangs on advertising

Where sales are concerned, it is legitimate to do just that: invite people to buy. In the extreme form, we find here – as in the classic pork belly advertisement in the newspaper for Aldi or Lidl – a product shot or an orgiastically beaming person in front of a dishwasher, together with the unmistakable product name.

At the end of the day, you’ll find the same two forms at the commercial:

At the beginning of TVC, the tension curve is built up – you wonder what the reasoning behind the situation/scene might be. This then offers a surprising but nevertheless comprehensible explanation.

The sequence in the structure can vary. Mixed forms between the two variants can also be found.

Pork belly commercials or jokes made into movies

Pork belly advertising is also in the form of commercials an authentic, honest way to bring a product to the man or woman. Say: Buy! Now! Mine! Product! Here!

It is often a tad less authentic where the advertising message is packaged in a funny story.

But most of the time it’s not a story at all. But a situation (more on that here). On the surface, this is deliberately irritating and thus arouses the viewer’s interest. A few seconds later the explanation follows in the form of the resolution.

Many commercials in this construction are nothing more than a more or less well told and more or less originally filmed joke.

The filmed joke is usually used in commercials where the aim is to increase awareness or to raise or change sympathy ratings. At its best, the story here resembles a short film.

You can learn from it:

The genre of commercials is not suitable for experimentation. Too much is at stake here. For you as the client, for the agency involved and also for the director and the advertising film production.

But you have other homework that tends to get forgotten every now and then:

Whether cribbed or unlucky, your competitors and the press will be happy to slap a copy of an idea around your ears! Therefore: Do not release a storyboard for realization without checking it first.

One setting too many or too few?

It’s always a matter of attitude. Especially when it comes to commercials. Because when it comes to seconds and frames, it’s tempting to shave off a few fractions of a second here and optimize a few blinks of an eye there. And that can really backfire.

Because no matter what role you play as a participant in the production of commercials, even old hands have trouble finding the right balance. This has nothing to do with experience. But a lot with the way our brains work.

When you see a commercial for the first time, your brain stores this information. That’s why on the second viewing you suddenly see things in the video that have remained hidden from you until now. Conversely, you now suddenly feel that a tracking shot is a bit too long. At least that’s what a brain signals to you. This is because it has already saved the image contents.

The overwhelming majority of viewers only see the commercial once. If you snip and cut in image editing without considering this, you’ll turn your commercial into a patchwork quilt.

The only thing that helps is the repeated involvement of people who have never seen the spot before. Be aware: Your spot is also created four times (more info on that here).

In digital post-production, you don’t live on a linear timeline. Whatever you (or your editor) does, you can always go back.

You don’t have that privilege when you’re tweaking your settings at the Storyboard level. And that’s what you’re gonna have to do. Because every shot that needs to be shot means shooting time and therefore hits your budget.

A shot that falls victim to length optimization in the storyboard does not end up in the day’s dispo. And will not be turned with it. If you notice in the edit that you can’t make the commercial work without this shot, you have a problem – and one that could end your career as a director or creative in an agency.

Therefore, it is not enough that you do what you can in the genre of commercials. You must also know what you’re doing.

Professionals like to use the possibilities of a pre-visualization, also known as an animatic or story reel. The finished storyboard is animated on a test basis and also rudimentarily set to music. The idea can thus be tested for its potential impact as a film concept in the form of moving images.

That costs a few euros more, but many euros less than a commercial that ends up with a three-legged donkey winning a horse race.

Dramaturgy for Beginners in Storytelling and in Entertainment and Corporate Movies

When it comes to storytelling and dramaturgy for newcomers to film and video, there is only one question that counts: How can dramaturgy help the content achieve maximum impact? Because it is not only the beginning and end that give a story its value when communicating with film and video. [mehr…]

Motivation as an Element to Trigger Actions in Video Marketing

The motivation of the target audience plays the main role when it comes to triggering a change in behavior with video marketing. Motives, activation and volition play an important role. A guide from practice for practice. [mehr…]

How does a film succeed in triggering an inner echo in its audience? In his new book “Motion Picture Design”, Hans-Jörg Kapp presents a fundamental work on this question that opens up new horizons for [mehr...]