Disney’s live-action adaptation “Cruella” (2021), about the teenage years of legendary Dalmatian hater Cruella De Vile from 101 Dalmatians, shows what the Mouse House does best: Entertainment for all ages. The film is carried by a compelling storyline and two power girls who share their first names as well as previous Best Actress Oscars: Emma Stone and Emma Thompson.

“Bloody well right,” Supertramp sing on the soundtrack of “Cruella,” noting in the chorus, “Right you are if you think everything has to do with money and where you come from!”

Estella (Emma Stone), traumatized as a child by the accidental death of her mother, has no family tree or regular income. While making her way through life with two friends by doing ganoventricks, she dreams of a career as a fashion designer. Through a trick of her friends, Estella gets a chance to sneak into the entourage of legendary fashion designer Baroness Von Hellman (Emma Thompson) for her birthday present. Soon enough, behind the innocent doe eyes of Estelle in “Cruella,” a plan develops that would also look good on Wonder Woman, Jessica Jones, and Harley Quinn. But as Wilhelm Busch, creator of the classic children’s book Max und Moritz, explained to his readers: First, things turn out differently, and second, things turn out differently than you think!

“Cruella,” from director Craig Gillespie, manages to develop the appeal of a fairground attraction after just a few minutes. If you’ve got a few years under your belt, you’ll be pleased to know that the film’s story is set in seventies London. Contemporary, tuneful hits from this period in the original versions, “She is a Rainbow” by The Rollings Stones included, follow each other blow after blow to accompany the action.

“101 Dalmatians” (1996) by Stephen Herek was one of the first live-action adaptations of a Disney classic. To follow up on the gigantic success, the sequel “102 Dalmatians” followed in 2000.

Now, instead of “103 Dalmatians,” Evil is getting a prequel. Cruella de Vil, in English deliberately a pun on Devil, was embodied at the time by Glenn Close. She is also involved in “Cruella,” but this time as an executive producer. This time the film is carried by Emma Stone and Emma Thompson. 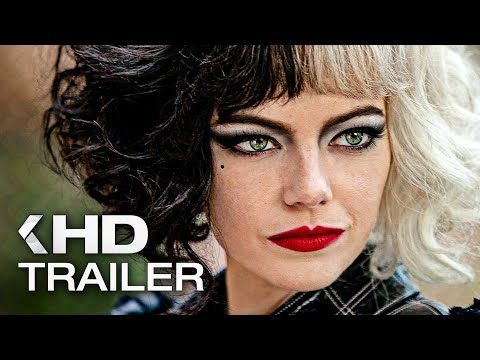 Emma Stone, reinventing herself as Cruella after a bipolar parforceride, holds a candle to Heath Ledger as the Joker (The Dark Knight, 2008). Still, you’re left with the odd feeling that Glenn Close’s more over-the-top character had more nimbus back then. Possibly because Emma Stone has to play against her Vivienne Westwood-reminiscent black and white hair. Or, this also jumps out at you, because the dilemma of positioning a main character driven by hate in a sympathetic and germ-free way is almost impossible to solve.

I was born smart. I was born a bad person, and … – I’m a little crazy!
Cruella

The traditionally important animal heroes in Disney productions, who are also not missing in “Cruella”, guarantee the expected cuddle impulses for younger generations, even if there are no 103 Dalmatians, but only three of them in the movie. Teens can look forward to action elements and comedic asides that will win over millennials.

In short, this film is a perfectly staged grab bag for all ages. The film can be described, as one film journalist recently did, as a mix of Disney campiness and fashion action. Those who grew up with Disney classics may well take this qualification as a compliment.

Besides the strong leading actresses Emma Stone and Emma Thompson, “Cruella” also convinces with many carefully cast supporting roles. First and foremost Paul Walter Hauser, who already shone in Clint Eastwood’s “The Case of Richard Jewell” in the role of Horace. Duoing with Joel Fry (as Jasper), the team’s best moments are reminiscent of Nathan Lane with Lee Evans in MouseHunt (1997).

But Kayvan Novak as lawyer Roger and, most notably, Jamie Demetriou in a lovingly comedic nod to fashion czar Yves Saint Lauren also justify the movie ticket or a streaming subscription on Disney+.

Another name that needs to be highlighted about this film is that of Jenny Beavan. The 70-year-old costume designer once again shows her mastery here. Her creations are opulent, original and would make even the fashion houses of Dior or Prada look good. When it comes to costumes, Beavan is one of the safest values in Hollywood. This is evidenced by 2 Oscars won (including one for Mad Max: Fury Road) out of a total of ten nominations.

As an insider, you have to ask yourself – especially in view of the intended broadest possible target group – whether the running time of 134 minutes is a bit generous, especially for very young viewers. Especially since the balancing act between comedy, action and family entertainment does not leave every sensitive child’s mind untouched. Conversely, the studio label guarantees a good outcome to the story.

This happy ending, however, has it all.

Because the underlying message of the film is that good girls go to heaven. Bad guys get everywhere. That alone is no reason to drop your bag of popcorn at the movies. But the supplementary explanation that socially incompatible negative behaviour patterns are excusable because they are inherited, which is repeatedly interwoven with this, is worrying. It’s true that “Cruella” doesn’t show any of the attempts to pander to the Far Eastern market that have become a necessity in Hollywood. But this mental naiveté of the key message moves this lusty, joyful film for reflective minds uncomfortably close to another hapless live-action adaptation of a harmless animated film from the same house: Disney’s “Mulan.” From that point of view, the story of “Cruella” is consistently thought out from the end, but not to the end.

This is also one of the reasons why you can expect a sequel to “Cruella” with excitement.

Cancer changes everything. But what a tumor can’t change: Love. Hope. Faith, friendship, courage and memories. Here you will find movies, feature films and documentaries about serious diseases related to carcinomas. [mehr…]

There are movies that get old. Other movies stay young. Se7en belongs in the latter category. It is time to rediscover this brilliant feature film from 1995 starring Brad Pitt, Gwyneth Paltrow, Morgan Freeman and Kevin Spacey. [mehr…]

Introduction to Film Editing: What Does Pacing and Timing Mean?

For much of what happens in the editing room, the word “edit” is too simplistic, if not misleading. It is not without reason that many filmmakers deliberately do not speak of cutting, but of “assembling” [mehr...]