Before he can get started with the preparations for shooting, a director has to overcome two hurdles when shooting a commercial: First, he must attract the attention of an advertising agency with his previous work and inspire with his showreel. This is the only way he is even asked for a director’s interpretation, which then, secondly, must be more convincing than the director’s interpretations of his competitors.

Why is a Director’s Interpretation needed?

Advertising agencies develop advertising measures on behalf of their clients, often in close cooperation (co-creation) with the client. In the case of TV spots, the result of this work is either an exposé or a storyboard. Once this has been approved by the client and released for filming, it is important to find the right advertising film director.

This is where the Director’s Interpretation (also known as “DI”) comes into play.

The principle of effect equivalence also applies to commercial films. Advertisers are aware that when a storyboard or a film idea is converted into moving images, it must be translated into another language – that of the film. This transformation requires more than just technical skill. It also requires a deep understanding of the intentions and communication goals that the commercial should convey.

With the Director’s Interpretation, the client and the agency want to close the gap between word and moving image before shooting. They want to see if the director shares their understanding, want to feel his intentions and get the assurance that the direction is in the right hands.

How do I get the request to write a director’s interpretation for a TV spot?

The writing of a director’s interpretation is always done only on request of an agency. Creative Director and Art Buyer usually choose three directors based on the showreels they have available. They are asked to formulate in writing how they would film the present idea or storyboard.

As a director, you can do no more and no less than make sure that your sensational showreel with the best of your previous directorial work for TV commercials will be remembered by the people in film-affine agencies.

Nobody likes to tell you this in an agency, but the fact is: clients usually want a director who has already shot similar products or similar commercials. From the client’s perspective, this reduces the risk of making the wrong choice of director. See also the interview with director Florian Meimberg, which is well worth reading.

How do I write a director’s interpretation for commercials?

A professional Director’s Interpreation is between 5 and 15 pages long (including illustrations). It consists of three components:

Structure and order need not necessarily be as described, but all three elements should be clearly recognizable in terms of content.

With the analysis the director shows that he has understood the task. At the same time it is also the derivation of your implementation proposals. These form the most important part of a director’s interpretation. Remember, you are building the bridge from the idea (or storyboard) to the finished TV spot.

This bridging is especially important when an idea relies heavily on film for its impact. Like in the great split-screen spot of the current Nike campaign, where 4000 video sequences from different archives had to be searched for the right material to finally unite 53 protagonists from 24 sports in one TVC. 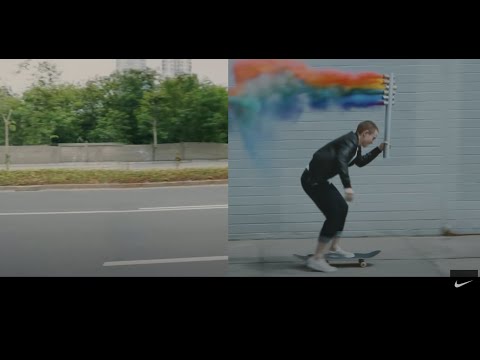 You can draw on the full range of suggestions for implementation. This does not mean that you are loquacious or arbitrary. But you should show that you understand the mechanics of the advertising film and that you have mastered your craft completely.

Because in the end, a director’s interpretation is always about trust and security, concrete advice on casting, dramaturgy, camera work as well as comments on image composition and colors, rhythm and staging are helpful. We are also happy to provide pictures or illustrations based on examples.

But that is not all.

The client and the agency want to feel that you are on fire for their idea. That’s why you have to explain why you want to shoot this TV spot. The word “reason” is central here. In other words, your personal reference. It’s about you as a person and an individual. Banalities like the empty phrase “I always wanted to shoot a TV spot like this” are no explanation! Instead, work out why you really want to make this commercial and why you are the only person in the world who could be considered for directing this TVC.

You must avoid these mistakes

Sure: Whoever is creeping, cannot stumble!

Nevertheless, you should avoid meaningless introductions like “I have rarely read such a convincing idea for a commercial” in your DI. This belly brushing only works if your counterpart has a problem with his or her own ego. You (apparently) reflect that you are on the same wavelength as the advertising agency.

But what if the CD or Art Buyer are painfully aware that the upcoming TV spot is only mediocre? Because otherwise it might never have made it through the customer’s approval process. Or because the agency could not have come up with a better film idea in the short time available.

What if, from the agency’s point of view, it is crucial that the director takes the storyboard to the next level with his directorial interpretation?

If that’s the case, you’ll hit the wall! Either because one of your competitors is telling the truth and thus helps the agency to create a really strong commercial. Or because if you get the job, you’ll be shooting a TVC that won’t bring you any follow-up work – or even damage your reputation as a commercial film director.

There are service providers on the market who specialize in directorial interpretations. You (or your film production company) can discreetly deliver to these providers the exposé or storyboard for which you were requested by the agency.

By e-mail or phone call, you as the director can outline your thoughts in a few minutes. A few minutes later, you will receive a Director’s Interpretation in PDF format with a professional layout (created as InDesign or Powerpoint), including image illustrations on look and feel, cast, locations and everything else that goes with it.

These possibilities are not only used by self-critical commercial film directors who believe that they can communicate better with images than with words.

Even established directors like to use this tool. Be it because time is pressing and the director’s interpretation has to be delivered within the usual three working days and at the time of the request they are busy on another commercial film production, but still want to work without a gap in employment. Or because they don’t feel like tearing off a leg or two just to get a refusal.

Nevertheless, those who do not write their DI themselves are cutting back on their own role, creative freedom and creativity as a commercial film director. He loses his competence as an artist and makes himself an executive assistant. This should and cannot be the task of the director’s interpretation.

The Competence to Recognize Incompetence in Film and Video

This article lists, in no weighted order and without claiming to be exhaustive, a selection of important criteria that are helpful in assessing film competence when dealing with film production companies and video makers. [mehr…]

Film and Photo: Should You Combine Film Shooting and Photo Shoot? If So, What Should Be Considered?

Because every single second counts in advertising, it is important to know in the pre-production phase exactly what will be shot later. This is why the shooting board plays an extremely important role in the production of advertising films. Here you can find all the information about it. [mehr…]