Editing movies can do considerable damage by manipulating the truth. This hasn’t just been true since Fake News and Deepfake videos.

Anyone who follows European history from the time of the Weimar Republic onwards, or the hunger for power of dictators, quickly realises that the moving image is one of the most dangerous of all media! Because a film doesn’t get its final form during the shooting on the film set. But only later, after a lot of important decisions have been made in the dark closet of the editor.

A film can’t help but be assembled. It is thus always a manipulation of reality. If only because the camera’s point of view is preceded by a subjective decision on the part of the director or cinematographer. Exceptions prove the rule.

Arranging shots and sequences in the context of montage offers a number of possibilities for manipulation. This concluding article in the Filmpuls series on film editing shows the most important types of cinematic manipulation. He explains the mechanisms and shows examples.

Digital image processing enables undreamed-of forms of altering the truth. To the viewer, seemingly real images appear as real and thus as facts and reality. This is especially true when the genre is not feature films or commercials. Television reporting in particular, but also docu-soaps and reports, have a very special trust factor with the viewer.

Truth is what we see

A fine example of manipulation of the truth is offered by the silent film“Battleship Potemkim” (1925). This Russian propaganda feature film directed by Sergei Eisenstein depicts the mutiny of the crew of the warship Knjas Potjomkin Tawritscheski against their tsarist officers. The film was edited by the director himself.

Premiered in Moscow in 1925 at the Bolshoi Theatre as an anniversary film celebrating the 1905 revolution, the work became a global success due to its montage and despite its communist message.

A year later, director Eisenstein contractually gave a distributor in Sweden permission to (quote:) “slightly re-cut his film before screening, but without omitting or adding anything.”

In the original, the film begins with the exploitation of the sailors by the officers. These answer the protest of their team with death sentences. Only at the very last moment does the firing squad turn on the officers. The Russian Revolution begins.

In the version intended for the Scandinavian market, the film began anew with the firing squad liquidating the officers. But this without showing the reasons for it. For this, at the end of the film, the revolutionaries stood trembling before the guns of the tsarist officers. This scene was in the original immediately before the liquidation of the officers by the crew. The changeover gave the impression that the officers had regained control and defeated the revolutionaries! 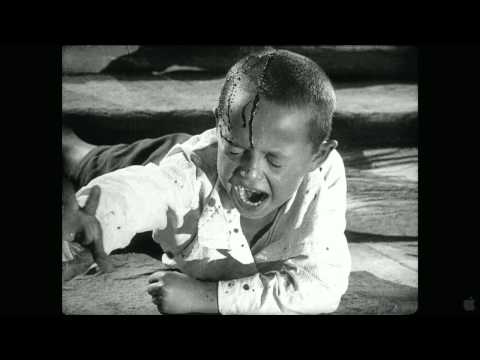 It must have been ironic that this incident had to be experienced by Eisenstein of all people, what a change of only a few scenes can do. For Eisenstein is still considered a master of dialectics in film editing.

His films have demonstrated to the world that through editing, shots that are detached from one another in terms of content can also enter into a relationship with one another. The viewer believes to discover the truth in the combination of detached things.

The montage is the moral dimension of the film!
Sergei Eisenstein

For example, if a man’s face was cut in front of a close-up of a piece of bread, the audience were convinced that the person to whom the face belonged was hungry. However, when a smiling woman was intercut between shots of the same man’s face, the moviegoers surveyed were firmly convinced that the man was showing pleasure in seeing the woman.

Everyday life, however, is the rearrangement of the order of chronologically shot shots, especially in docu-soap and reportage on private television. Here, the editing is often manipulated and tricked until even the devil has a tear running from the corner of his eye.

Example: A married couple talks about their relationship in front of the camera. When the man adds that it was love at first sight for him, the wife gives her husband a critical, disapproving look. On average, the statement about the couple getting to know each other is judged by the editor to have little relevance to ratings. She doesn’t end up on the show. The critical view of the woman, however, finds its way into the public eye.

To spice up the episode and to give the content additional suspense, the shot has landed as an intercut at a point where the man declares, not without pride, that the relationship is working very well even in the darned seventh year of marriage. Where in the original the woman in truth smiled approvingly, the asynchronous intercut now turns the statement into its opposite and signals: There will be a real fight between this couple in one of the upcoming episodes!

Animal, documentary and by animal rights activists love the so-called Mickey-Mousing. The term, the name says it, was coined when Disney was editing movies. Part of the reason the entertainment company’s animal films of the 1950s were so successful was that the editing, through clever sequencing of shots, gave the animals apparent emotions and reactions related to the action. These seemed human-like, but had nothing to do with reality. Movie dog Lassie says hello.

The trick with the time manipulation

An everyday example of far more harmless manipulation of the truth in film editing is the insertion of immovable objects into a storyline.

In contrast to living objects, the viewer does not associate motionless objects with the passage of time. If a film or video shows two shots of a person walking in succession, the viewer does not necessarily conclude that time has passed between the shots. If a third shot is inserted between the two shots, showing a motionless object, this combination suddenly suggests (unlike in reality) the progress of time.

The reason for this phenomenon can be found in the fact that visible movement is directly linked to our natural perception of time.

Motionless objects, conversely, do not symbolize a real passage of time in the viewer’s emotional world. They are, in a sense, timeless or infinite.

The combination of real time sensation with unassessable passage of time therefore causes the subsequent setting to feel as if time has passed.

Movie Lies: Manipulation of the truth

You can only spot film lies if you understand how they can be created during film editing.

Hugo Ball, co-founder of the Dada movement and author, already recognized in the thirties:“The image is the mother of the word“. The father of the moving image, that is film editing. That is why filmmakers and video producers have a very special responsibility when editing films. Professional knowledge of the power of film continuity always entails a responsibility,

However, and this is important, there is also a differentiation to be made in the manipulation of truth through film editing: Here, too, there are four types of lies!

The contents of the series “Editing Movies

For more on editing movies and manipulating the truth, see the bibliography below and Filmpuls’ article on Good Movie Books.

Literature on the subject

In the pioneering days of film, film editing was limited to cutting the events necessary for the narrative one after the other in chronological order. But as early as 1901, James Willamson went a step further for the first time in his film “Attack on a China Mission”: he invented the parallel montage. [mehr…]

Part 3 of the four-part Filmpuls summer series on film and video editing. Film editing, like any cinematic discipline, is a craft with the potential of an art. Craft and artistic aspects of film montage can be considered not only in terms of content, but also from a purely formal point of view. [mehr…]

Unlike a photograph (at least before the invention of Photoshop), the linking of scenes that occurs in montage offers little controllable opportunity for manipulation. Here you can find examples. [mehr…] This article was automatically translated [mehr...]