The action comedy “Red Notice” with Dwayne Johnson, Gal Gadot and Ryan Reynolds brings three superstars of cinema within just one week both in theaters and in the home. For this near parallel movie release, lovers of the big screen may praise or blame Netflix. Nevertheless, “Red Notice” deserves the title of blockbuster without reservation. For what feels like an eternity, finally a film in the best Hollywood style shows how to provide the best entertainment with wit and pace for the large audience.

Dwayne Johnson plays an Interpol agent on the hunt for jewelry thieves in Netflix’s “Red Notice.” Whereby the superstar, as in all his films, plays himself first and foremost. But because he always does this with a good portion of self-mockery, one is happy to let him get away with it. As well as Ryan Reynolds. He too is first and foremost: Ryan Reynolds, ladykiller, slasher, and reliable producer of trusting dachshund looks.

The third of the bunch, Gal Gadot, gets a hefty helping of that. In general, the actress surprises, who so far as Wonder Woman repeatedly gave the impression that she was ashamed of her plastic heroine costume. She can do humor too! 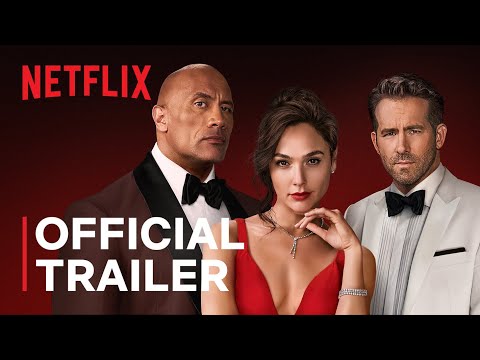 In “Red Notice,” events force the FBI’s top profiler, John Hartley (Dwayne Johnson), to reluctantly cooperate with art thief Nolan Booth (Ryan Reynolds). Together, they are tasked with taking down the best art thief in the world (Gal Gadot). But because not everyone knows everything and it is not always clear who is working on whose behalf, events come thick and fast.

Where to watch
nur im Kino

The plot of “Red Notice” – loosely translated as “Red Alert” – could have been borrowed by Netflix from a ’90s blockbuster. Interpol agent (Dwayne Johnson) teams up with a crook (Ryan Reynolds) to put a stop to an art thief (Gal Gadot). Along the way, a fast-paced action spectacle unfolds with plenty of references to earlier blockbusters: from “Indiana Jones” to “Ocean Eleven.” Dwayne Douglas Johnson was born on May 2, 1972, the son of a Samoan-born actress and a Canadian wrestler. Already his grandfather was a famous wrestler. During his childhood, which was marked by his parents’ money troubles, the family moved frequently, so that he grew up in New Zealand, Hawaii and 13 other US states. As a teenager, he got into trouble with the law several times.

Today, 277 million people follow Dwayne Johnson on Instagram. The actor, who has also been rumored to be the future president of the United States, has the fourth largest number of followers ever. That’s why he’s considered one of the most important influencers in the world. This influence is also reflected in his fees. He reportedly received $20 million from Netflix for his role in “Red Notice.”

Serving as turbo boosters for the plot of “Red Notice” are three ornately decorated golden eggs. These were supposedly given to the last female Pharaoh of Egypt, Cleopatra, by the Roman Emperor Mark Antony on the day of her wedding. An Egyptian billionaire wants to give these three precious objects to his daughter, also named Cleopatra, as a wedding present. He therefore offers a fortune to the person who provides him with the unique pieces of jewellery.

“Red Notice” is enjoyable because Netflix and its creators – most notably director and screenwriter Rawson Marshall Thurber – were smart enough to understand that a movie doesn’t always have to be more than a movie. Entertainment, but in such a way that you won’t be bored for a second.

That’s why you forgive this Netflix movie for reviving the old blockbuster formula with limited virtuosity: take 30% action, 17% humor, 13% good vs. evil, 12% love and romance, 10% special effects, 10% plot, and 8% music. You’re no wiser after watching Red Notice. But neither are you dumber.

Thurber (46) launched his career with a commercial for a manufacturer of athletic shoes. He also directed Dwayne Johnson in the Hollywood hit “Skyscraper” back in 2018. That the two had a lot of fun together during the renewed shooting is vouched for. Ryan Reynolds, notorious for improvising on movie sets, did his part. As he recounts in an interview, many scenes had to be repeated in far greater numbers than usual because spontaneous jokes and laughter from the main actors rendered the shots unusable.

The fact that “Red Notice” opens in German theaters on Nov. 4 and is available online at Netflix just a week later wasn’t always meant to be. After the successful launch of “Skycraper”, all the major studios fought for the rights to the follow-up project, for which Dwayne Johnson, Gal Gadot and Ryan Reynolds had already signed on. Universal emerged victorious in the race with Legendary Pictures, New Line Cinema, Paramount, Sony and Warner Bros. It wasn’t until 2020 that the opportunity arose for Netflix to take over and produce the script.

Depending on the source, “Red Notice” is said to have cost between $150 million and $200 million to make. This would make the film the most expensive feature film ever produced by Netflix. Those who remember the 209-minute “The Irishman” may put a question mark behind that. It’s not important to the viewer. More crucial is the entertainment value. “Red Notice” has almost more of that than Dwayne Johnson has muscles. And that’s saying something.

Filmpulse does not receive any commission for your click on a link of the streaming provider.

Any director who adds a sequel to the James Bond phenomenon is basically a poor guy. 007 is now servant to many masters. Cary Joji Fukunaga has taken up the challenge with No Time to Die. [mehr…]

Heroic Courage Into Your Own Doom: »Richard Jewell« by Clint Eastwood | Film Review

«Richard Jewell» by 90-year-old director Clint Eastwood tells the story of a simple security guard who becomes an uncontrolled hero and a few days later a tragic figure. [mehr…]

Cancer changes everything. But what a tumor can’t change: Love. Hope. Faith, friendship, courage and memories. Here you will find movies, feature films and documentaries about serious diseases related to carcinomas. [mehr…]