You take a first energy drink. This stuff doesn’t taste very tasty, but it makes you wide awake. So you take another one. And the next. You can’t stop doing it, and then you’re addicted. It’s no different with Netflix’s new series Squid Game.

Never before in the history of streaming has a series taken over the world as quickly as Squid Game. The nine-part saga about the voluntary but deadly struggle for survival by participants in a kind of prison camp has gone to the top of the charts in almost every country in just three days. 13 million followers on Instagram and immediately became famous worldwide with her first role as an actress: That’s Jung Ho-yeon (28).

The Seoul-born South Korean model, who previously drew attention for her fiery red hair at fashion events and on the docusoap “Korea’s Next Top Model,” has catapulted herself into the premier league of a new generation of Asian stars with the Netflix series “Squid Game.”

Jung Ho-yeon was nominated as “Top Newcomer” and “Model of the Year” in 2017. A year earlier she designed a collection for the fashion label Louis Vuitton. She can be seen in commercials for Chanel, Gap and Hermès, among others. Her picture was on the covers of famous fashion magazines like Vogue and Harper’s Bazaar, where she was often portrayed in the editorials as the new supermodel.

This is completely insane. Just how insanely successful Squid Game is can be seen by the fact that new fan merchandise for the series is now popping up on the internet every hour. For Halloween, you can already shop on the web for masks and prisoner suits or the red uniforms of the guards with the look from the series.

You have to give it a shot: The series was invented, written and directed by the same man who wanted to turn it into a feature film an incredible 13 years ago. Only, no producer was willing to make a feature film out of this whacky story. The production costs of Squid Game as a nine-part Netflix series tell their own story in the process.

There are many voices accusing Squid Game and Netflix of actually recycling Hollywood movies like “The Hunger Games” here. The only stupid thing about it is that the writer and director Dong-hyuk Hwang had already written the original feature film with this story in 2008 – and thus four years before the first part of the “Tribute of Panem”.

Dong-hyuk Hwang (50) was asked in an interview why it took him so long to finally film Squid Game. His answer: “Maybe I still have to learn what teamwork means”.

I think this guy knows exactly how people work with each other and especially against each other! Because in his series he distinguishes between the individual characters and their social skills as precisely as a surgeon does between healthy and diseased organs during an autopsy. Maybe Hwang just doesn’t want to have his crass ideas ruined by too many people.

Dong-hyuk Hwang says he spent six months writing the first two episodes of the series alone. As a writer, it would have taken him a very long time to realize what the key to success really is with this series. Namely, the incredible banality of the tests that the participants in Squid Game must pass at the risk of death. Because it is this simplicity that allows the viewer to concentrate on the characters in the series and become one with them. 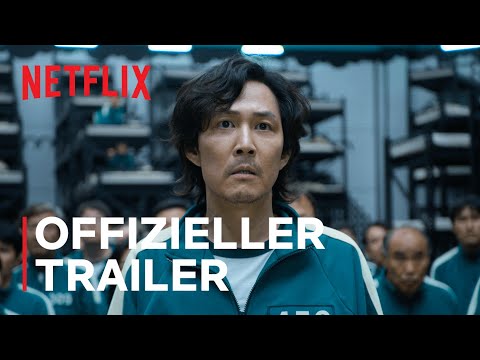 456 people of all ages and genders compete in a survival game over several rounds at a mysterious camp out of a need for money. The rules of the game: if you lose, you get killed. Anyone who breaks the rules or doesn’t follow the house rules will be killed. Riches beckon to the winner.

Compliance with the rules of the Squid Game is monitored by anonymous supervisors whose true intentions are unknown.

South Korean series aren’t really my thing. Wild feature films from this country, however, I’ve seen a few: In “Parasites” (2019) and “Okya” (2017, Netflix), both by Bong Joon Ho, you get a sense of what happens when too many people live together in too small a space, much like in Netflix’s Squid Game.

You have to be able to translate something like that into a series. As a hardcore movie fan, you’ll find the visuals in Squid Game to be rather average. You get consumed by the suspense and because the plot is told cruelly well.

When I had the idea for Squid Game, I was in financial trouble myself. I wondered how it would feel to participate in the games myself.
Dong-hyuk Hwang

The series is pretty brutal. But only in comparison to what a TV audience of retirement age is otherwise offered in terms of entertainment on TV. Even today, cinema film series like “Saw” or “Hostel” (both from 2005) are more gruesome. Because these movie series show violence for violence’s sake, and you can’t make any deeper sense of it even after five energy drinks.

Squid Game, on the other hand, can be read, if you like, as a critique of capitalism and our system of social order. Money keeps the world together and running. But apparently not with the creator of the Squid Game series:

The writer and director of Squid Game said publicly a few days ago that he couldn’t imagine writing a second season at all at the moment.

“Squid” means “octopus” in German. The Korean children’s game of the same name is named after this sea creature. But the octopus is also a goo creature that, when in danger, hides behind an opaque cloud of color it splatters. And splashing ink until we all don’t know where to look from nervousness, this is a game Dong-hyuk Hwang masters brilliantly.

Filmpuls does not receive any commission for your click on a link of the streaming provider.

A Pile of Hay Made of Needles: “Mare of Easttown” with Kate Winslet | HBO

By the time you realize you’re stuck, it’s too late. Kate Winslet is even worse off in the HBO series “Mare of Easttown”: the detective, played by her magnificently, is so worn out that she no longer feels herself. This has consequences. [mehr…]

This article analyzes a dialogue scene from the TV series “The Crown”. It shows by way of example what is possible when cutting dialogue. And he uses screenshots to explain the most important rules for [mehr...]