“The Beauty” by Swiss director Pascal Schelbli wins an Oscar for the best up-and-coming talent in animation. The animated short film was created as part of Schelbi’s final thesis at the Film Academy Baden-Württemberg in Ludwigsburg.

“What would happen if plastic could be integrated into life in the sea,” asks director Pascal Schelbli in his final thesis at the Baden-Württemberg Film Academy in Ludwigsburg. For his answer in the form of a four-minute digitally animated short film, he has now been awarded an Student Academy Award by the renowned Academy of Arts and Science.

The Animation Institute of the Filmakademie Baden-Württemberg is one of the world’s leading european schools for animation, visual effects, technical directing, animation/effects producing and interactive.

“The Beauty” (director: Pascal Schelbli, VFX supervisor: Marc Angele, animation: Noel Winzen, producer: Tina Vest, Aleksandra Todorovic) is crowned with the Oscar for the best newcomer at international film festivals. The animated film has already won the renowned VES Award in the category “Outstanding Visual Effects in a Student Project” and was also awarded the Jury’s Choice Award at the first virtual SIGGRAPH. In 2019 it took second place at the “Climate Clip Awards” and the Jury’s Choice Award at the “Animago Awards”, this year it was awarded at the “NaturVision” festival.

The Student Academy Award Pascal Schelbli won is presented by the Academy of Motion Picture Arts and Sciences. It is considered the film industry’s most important award for student films. The award is highly competitive. For this year’s award, some 1500 films were submitted to the Academy by 207 American and 121 international film schools.

Johannes Preuss, also from the Baden-Württemberg Film Academy in Ludwigsburg, was already able to get the coveted trophy in 2017 for his documentary “Galamsey”.

Pascal Schelbli also works as an animation director himself. As a CGI artist, he develops and animates 2D and 3D objects that are used in digitally animated films. The difficulty is usually to find a balance between vision and artistic intention on the one hand, and technical limitations on the other. As “The Beauty” shows, the director has mastered this balancing act. 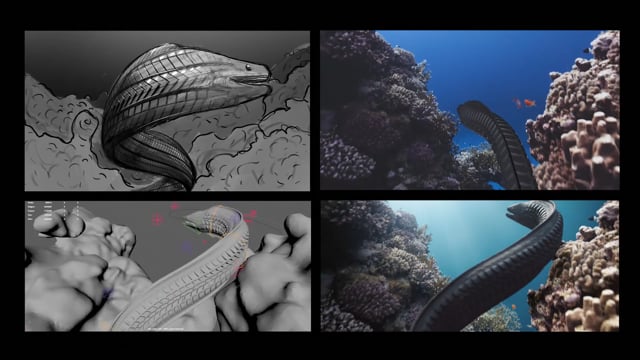 An interview (German language) with director and CG artist Pascal Schelbli , which is well worth reading, has been published by the Animation Institute of the Film Academy Baden-Württemberg in its blog, the article bears the title An underwater world brought to life – from Egypt to Los Angeles

With the VR film “1st Step”, the history of the moon landing can be experienced in a completely new form thanks to virtual reality. The film celebrates its international premiere in New York at the renowned Tribeca Film Festival 2020. [more…]

Cannes Corporate Media & TV Awards cordially invites filmmakers, clients, agencies, TV stations and students from all over the world to submit their productions to the competition. Submissions are possible until 4 June 2020. [more…]

In the second part of the series, FILMPULSE introduction to video technology explains the advantages and disadvantages of the most popular video formats. In addition, questions of conversion (the transformation from one video format to [more...]