Great cinema must move the audience. “They Shall Not Grow Old” by Peter Jackson (“Lord of the Rings”) shows that this is also possible with a documentary film. Can you remember the first time you saw color? Really conscious? And so colorful that it hurts?

To leave the world of black and white filming, this experience is shocking in “They Shall Not Grow Old”. This extremely unusual documentary film demonstrates how closely color (and sound) are linked to our sense of reality. It impressively demonstrates why the invention of the sound film in 1927 and the colour film from the 1950s onwards were groundbreaking milestones for cinema. And how strongly colour, sound and emotion are intertwined.

They Shall Not Grow Old consists exclusively of a selection of 600 hours of original film footage from the years 1914-1918, made available to director Peter Jackson (known, among other things, for his film adaptation of the Middle Earth epic “Lord of the Rings”) by the Imperial War Museum.

They Shall Not Grow Old

Jackson, a New Zealander born in 1961, has limited himself exclusively to sequences that accompany young Australian and New Zealand soldiers under the flag of the British Empire on their way from civilian to soldier on the European Western Front of the First World War. The trick here is that the black-and-white images have been transformed into colour photographs using the latest digital technology.

They Shall Not Grow Old destroys the usual clichés. The documentary shows everything: the little moments of joy when cigarettes are distributed, as well as the – there is no other way to put it – death of the soldiers in knee-deep, bloody mud.

And yet, while listening, one begins to see and understand: it is the small moments that ultimately make up the value of life. Even in the horror of the front of the First World War.

When 100 years feel like yesterday: They Shall Not Grow Old

They Shall Not Grow Old does not want to close itself off completely from the dramaturgy and 3-acts structure of classic fictional Hollywood films. Kubrick was more consistent in this respect with his anti-war film “Full Metal Jacket” (1987) and refused the third act.

Director Peter Jackson, on the other hand, marries responsibility with entertainment. He succeeds in this without ever losing sight of the respect and the cause in itself. At the box office, the skilful balancing act between consternation and voyeurism since the film’s release has been rewarded with more than 20 million box offices. For a historical documentary this is an excellent result. Especially since the film was even shown free of charge for a time on the occasion of the 100-year anniversary of the end of the war.

Movie trailer “They Shall Not Grow Old” 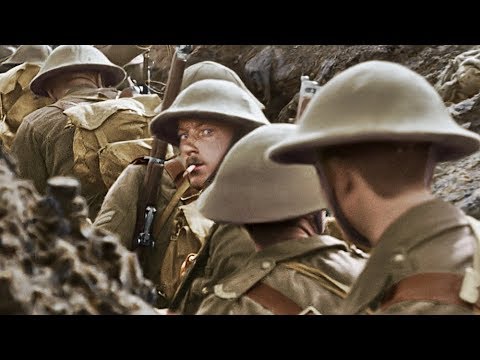 Jackson’s They Shall Not Grow Old begins with black and white shots. For the first time, you can hear the voices of veterans who describe their war experiences in original sound. At this point in time, the viewer is at most amazed at how unusually quiet the shots are compared to other contemporary film documents. This is due to the fact that the settings have been digitally stabilized and adapted to today’s technical, perfect, standard in terms of running speed.

The typical “pumping” of the silent films, caused by the transport of the celluloid frame by frame by the locking gripper in the film camera, is missing in They Shall Not Grow Old. This means that the racket of Charlie Chaplin and Buster Keaton is now decades away from the very first second. With this clever trick, the director forces the cinema audience to embark on a journey without emotional comparisons. In this way, he will later rob his authentic images of their harmlessness forever.

They Shall Not Grow Old is a documentary journey into darkness

Still in black and white, but the first shades of grey have already appeared in the off-voice, we travel to the front with the soldiers who were recruits a moment ago. Some of them are only 16 years old. None of them knows that up to 5,000 men per day (!) will lose their lives.

But then the Moloch trench warfare in They Shall Not Grow Old also strikes visually.

Not by a change of scene or a re-cutting. Jackson relies on a seamless transition: the previously square black-and-white picture moves up and becomes colorful. This color world is so imperfectly perfect that one shudders in the knowledge of the authenticity of the images. Men who lived 100 years ago look us straight in the face. Nothing reminds us of the sugary-sweet colourfulness with which the classic “Wizard of Oz” enchanted the world many decades before at Judy Garland’s dance to fairyland.

This is made possible by the same technique that made the monsters in Lord of the Rings a reality. In They Shall Not Grow Old, the faces of the soldiers in the original shots were digitized three-dimensionally, sharpened in color and placed on the individual images.

The result is absolutely convincing. The smallest nuances in facial expressions, a twitch behind the eyes or the short-winded puffing of a moist cigarette get their deserved weight.

Simultaneously with the dissolution of the abstractness and thus the blasting of the timeline, the sound level also leaves the silent film.

The sound film celebrated its premiere in 1927, but only made its global breakthrough in 1936. For They Shall Not Grow Old they didn’t invent a soundtrack. The recordings were meticulously transcribed by lip readers and then dubbed with professional actors.

The same applies to the sound design. Here, old, original military equipment was rolled out of the museum and recorded using state-of-the-art sound technology. Together, the composition of narrative voices, reconstructed soundtrack, and-so much Hollywood congenially goes straight to the heart.

They Shall Not Grow Old is dedicated to the director’s grandfather, who himself took part in the First World War. Consequently, the documentary film tells first and foremost of the struggle between the troops of the United Kingdom and their German opponents.

Soberly, one can grant this documentary film a certain simplistic proximity to a woodcut. Only the colour images and thus the shocking authenticity prevent a black and white historical misrepresentation. Therefore, They Shall Not Grow Old remains a close-up. This does not detract from his ability to shake and touch the audience. Especially since it is known that filming at the front always serves propaganda purposes.

Or, to quote Machiavelli: here the end justifies the means.

Genius Documentaries: These Three Docs Have the Potential to Change Your Worldview!

Life often writes the better stories. This is currently proven by 3 brilliant documentaries: “The Mole – Undercover in North Korea”, “The Dissident” and “Alternate Endings: Six New Ways to Die in America”. [mehr…]

Tips and Tricks for Writing Commentaries for Image Film and Video

Siddhartha is the nine-year-old son of 65-year-old guru Fabrizio. He lives with his son in a community outside a village in Italy, with the father deliberately foregoing the comforts of today’s world. [mehr…]