As a decision-maker, you want facts. Especially when it comes to video content for social media. And this is precisely where the two success factors view through rate and emotions create a tangible conflict of objectives.

In theory, it’s simple. The video length is not only an important factor for the production costs. Studies show that short videos are more likely to be watched to the end by the user in social media than long films. That’s why it is important to “explain the benefits in a nutshell”, as was the case with TV commercials (there, however, driven by the media costs for broadcasting on TV).

You need to know this

VTR is changing the rules for the video length

In short, in conventional TV advertising in the German-speaking world this usually meant a film length of between 20 and 30 seconds. 15 seconds was considered ultra-short. Everything over 35 seconds was already indecently long (and a privilege for the makers and storytellers).

The reduction of the attention span has changed the rules of the game. We must learn to narrate in short formats.
Sorin Patilinet

Quite different on the web: Anyone who travels on the Internet is exposed to a constant flood of stimuli and temptations. We have all learnt how to get what we are interested in ourselves in the digital world. Everything else we click away. That’s why the length of a video as well as the time the user spends with the video content plays a crucial role here.

The view through rates is one of the most important measures of the success of videos as a Key Performance Indicator (KPI). And also VTR is always good to surprise us with amazing facts on videos.

That’s why research is constantly underway around the world to determine how long a video can be.

View Through Rate against emotions

The moving image draws its power from the emotions it can generate better than other instruments. Compared to photos, videos can tell a story more easily and at the same time more clearly. Good storytelling triggers emotions in the viewer through identification.

Studies have shown that emotional videos can achieve up to 75% higher conversion [Superscript]1 [Color-E] and thus increase sales than information or content with little emotion. Emotions are a success factor for the success of online videos.

But for emotions to have an effect, they have to be seen in the first place. This is where the behaviour of the user collides with the intention of the video maker and the requirements of the medium video.

Because users mainly use mobile devices, TV spots with 30 seconds running time no longer have any effect!
Caroline Hugonenc

Videos with a length of 6 seconds (!, exactly, five times shorter than a conventional commercial) are consumed significantly more often from start to finish than longer works2. 55% of all Internet users (a gigantic good value on the web) watch such videos in their entirety3.

The number of people watching a video on the web from start to finish is recorded in the view through rates. The VTR is thus also a measure of success for the correspondence between the video concept and the target audience on the respective distribution channel.

The aim is therefore to generate a maximum of emotions in as short a time as possible. Provided one believes the study and 6 seconds in length offers the greatest guarantee, in terms of VTR, that a video will be watched from start to finish. And emotions ensure maximum impact.

Two practical examples of videos with a length of six seconds. Both are not just any videos. The first is for SNICKERS® in use, the second advertises the vodka producer Smirnoff on the web. 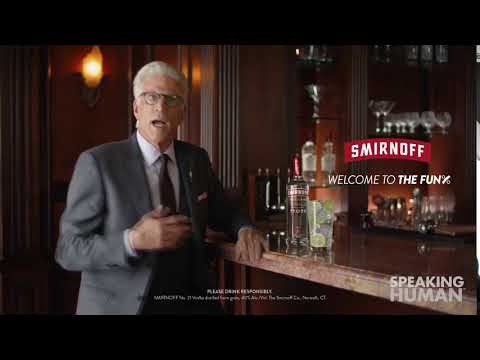 Both videos have, apart from the length restriction to 6 seconds, two further similarities:

They consist of a single shot (the camera doesn’t change the angle of view, it doesn’t even move) and both videos work with humor. The grandmother in the Nike commercial says: “And you told me this baby is cuter”. The US actor Ted Danson tries in vain to bring not only the product but also himself into play.

It’s also striking that both actions mark the beginning of a story, but the continuation of the story takes place in the mind of the viewer. One of the reasons for this might be testing the view through rate.

The way Hillbilly (who is a hillbilly because of his clothes?) reacts to the sarcastic comment of his grandmother or mother-in-law, only our imagination has the right answer. The same goes for Smirnoff. Whether Danson freaks out after the 6 seconds or takes a good sip, we project the answer ourselves.

It is also super interesting that the online clip for alcohol has no (!) Call to Action. It ends abruptly. Secondly, the clip conceptually continues on an ancient principle from TV and film journalism: It openly names horse and rider. That means the cards are on the table. We learn from the beginning that the stopwatch is running and that the video ends after 6 seconds.

In order for emotions to take effect, a number of conditions are required. These have less to do with moving images than with the way people function.

Building emotions takes time. In this respect they are similar to building a relationship. Herein lies the great challenge. A few seconds are rarely enough.

With a length of less than 10 seconds, most online spots reach their limits. The video lengths required for optimized view through rates bite with the time required to convey emotions with confidence.

Functioning solutions are the concentration on one scene. The eternal mantra “Situations are not stories”, which is stubbornly preached for successful storytelling (even at film pulse), may be dispensed with for short online spots. Must even be dispensed with. Because the content has to “click” with the viewer immediately, one must not be afraid to resort to clichés. Because only these clichés immediately create clarity as to what is at stake.

For these reasons, shortening existing TV spots or online videos can only work in the rarest of cases. In this case, less is not more, but nothing at all, because the effect is completely lost due to the lack of emotional bridges designed for short lengths, which also drags the view through rates down. No less. No more.

More about the View Through Rate

If you want to delve deeper into the subject matter, you will find detailed information in the (only available in English) professional article 6 Ways to Make 6-second Ads Work Harder.

Email Marketing: How Do I Properly Insert My Videos Into Text Messages?

Video e-mail as a marketing measure is still in its infancy for many users, despite the long since introduction of HTML5. This article tells you how to embed videos correctly in emails. [mehr…]

Best Practice: 7 Tips To Drive More Traffic To Your YouTube Channel In 2021

Create Instagram Videos: These 7 Strategies Will Make You Succeed

More than 800 million active users is an argument. This article presents 7 strategies that are sure to succeed when creating Instagram videos. He explains what to look for when professionally implementing campaigns on Instagram. [mehr…]

Tracking Shots in Film in Theory and Practice (Part 3): Motivation and Types

When a camera leaves its location, it is called a tracking shot. Depending on the dramaturgy, the camera’s line of vision can go in all directions during the journey. How are camera movements used correctly? [mehr...]