One of the biggest changes film and video production has ever seen is upon us. It’s called “Virtual Production” and it pretty much overturns all production methods that have been valid since the invention of film. It fundamentally changes the way films are made.

Let’s get this out of the way right off the bat: This article is not about things that might one day change your life as a filmmaker. He is simply pointing out what is already happening in film production in many countries. The technology, currently known as “Virtual Production”, is already proving its worth in feature films and commercials.

What does Virtual Production mean?

Virtual Production is a collective term, which literally translated from the English language means nothing else than virtual production. This one, however, has it all.

Unlike in the past, this way of producing films merges reality and virtually generated backdrops. This is done in real time and with the inclusion of all elements that are crucial for filmmaking: Image composition, light, color, perspectives, decor, camera and actors are combined in virtual production in real time directly during staging.

The film industry is just jumping from filmmaking 1.0 these months. straight to filmmaking 5.0.
Joe Russo

This makes Virtual Production a fusion of film and game in technical terms. Because only the powerful game engines together with the latest LED technology make virtual film productions possible today with a rendering in real time, i.e. without any delay. And no, it’s less expensive than you think.

Why “The Mandalorian” uses virtual sets instead of green screen | © YouTube, Movies Insider 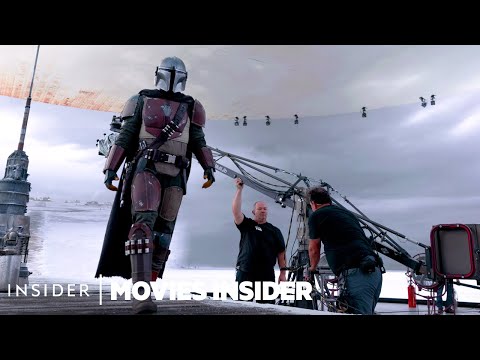 For a filmmaker, this means standing in a studio with his cameraman and actors. The camera is coupled with a game engine and moves in a so-called volumetric space. The term volumetry refers to a technical measuring method used to measure space. This makes it possible for the computer to track both the camera and all elements in front of the camera lens and place them in a 3D environment. The background, and not only the background, is covered with LED screens in front of which the actors act.

The screens with LED technology are panels as high as houses and at the same time capable of displaying the background with pixel accuracy as a background image rendered in real time.

What are the consequences of virtual film production?

Virtual Production pretty much overturns everything that has been involved in the film process up to now. Thus, with this type of production, there is no more subsequent image processing. There is no longer any need for post-production because the entire visual appearance is determined during shooting and is already recorded in the final quality.

But also pre-production is completely redefined in Virtual Production. Location scouting is no longer necessary because real filming locations are no longer required. Instead, virtual scouting takes place: the digital film sets can be entered and explored in the studio as sketches in 3D space.

After virtual scouting, the individual scenes are pre-visualized. This allows the film team to make all the creative decisions and – more importantly – test them in peace and quiet without stress.

This gives the director an unprecedented freedom, which also makes the producer happy, because the test phase preceding a shoot means that many decisions are made that prevent costly delays or repetitions in shooting with expensive stars.

Example: virtual set, decor and lighting is calculated in real time, if a piece of furniture is clicked away, the lighting adapts. At the same time, the lighting mood can be created digitally and thus changed at any time | © YouTube, UE4 Architecture 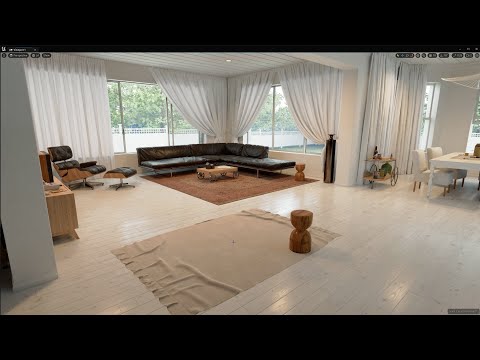 Who are the frontrunners in this development?

The new way of film production became visible to the general public for the first time with Disney’s feature film “The Mandalorian” (2020). The fact that it was a great success, both artistically and financially, gave Virtual Production an additional boost. 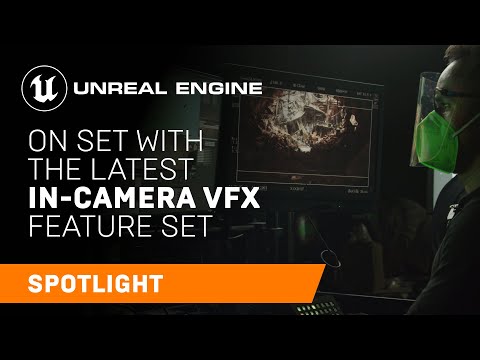 From a technical point of view, LED panels have played a decisive role in the growing success of virtual productions. One of the suppliers currently leading in this field is the company ROE Visual with its HD LED studio screens called Black Pearl or the Crystal LED video walls from SONY.

Absolutely crucial, however, are software solutions like Unreal (links see last chapter) or Unity. Only they make the connection of all virtual elements with reality in real time possible. Until recently, this required expensive GPU technology. Due to recent technical developments, engines in game laptops and in the upper spectrum of commercially available computers are now sufficient for this purpose. This means that the entry hurdle to this futuristic type of film production has once again been lowered decisively.

Links on the subject of virtual production)

Here you can find more information about the topic virtual production:

Quote: Joe Russo is a film director, screenwriter and producer. Together with his brother, his directing credits as Russo Brothers included the feature film “Avengers Endgame” (2019).

Movement is one of the basic characteristics of the medium of film. Nevertheless, there is often a lot of confusion about how and when to move the camera and when not to. Here you will find episode 1 of our four-part introduction to camera movements. [mehr…]

Panavision Film Cameras and Lenses – The Breath of Hollywood

They are the symbol of Hollywood and great cinema par excellence: Panavision, based in Woodland Hills, California, is one of the world’s most important manufacturers of professional high-end digital camera systems. [mehr…]

The camera doesn’t lie, the saying goes. Still, there are rules that govern what works for photo and film. Filmpuls explains the 5 principles for formal image effectiveness (photogenicity) and gives tips on looking good in photos and videos. [mehr…]

Movement is one of the basic characteristics of the medium of film. Nevertheless, there is often a lot of confusion about how and when to move the camera and when not to. Here you will [mehr...]