Last week, a busy organizer invited the communications community to a presentation on the trendy topic of virtual reality and storytelling. The sobering reality: the event was in fact not dedicated to the VR trend, but rather to the organizer’s self-promotion.

Let’s face it! Glasses made of cardboard are a joke for trendsetters, but not an introduction to a complex topic which also has the potential to become much more than just an insider trend for marketing and communication with film and video.

But the wise man knows: To a fig leaf also belongs a fig tree! In order that this can take its deserved roots, we sketch here in a small foundation in the sense of a current position determination.

AVirtual reality: The challenges on the way to becoming a megatrend

According to current research and knowledge, VR has three major challenges to overcome before it becomes a megatrend for storytelling. Like all great obstacles, these hurdles seem trivial at first glance. Especially since the production of videos has long since become part of everyday life.

Developers at Oculus and other leading innovators in VR see it differently. They continue to struggle with the following challenges today:

Virtual reality, as the term implies, is supposed to convey authenticity. This means for the human being, who in most cases carries two eyes in his head, to see life three-dimensionally.

3-D movies and 360 movies have been in theaters and event parks since the seventies. But still, and despite online and increasingly perfect films, the technology has surprisingly not managed to gain widespread acceptance in film production and for video films with storytelling.

If VR wants to establish itself globally among the masses, it must finally and convincingly solve this problem.

Motion as a challenge for virtual reality

When a person moves his head, the angle of vision and perspective change. When we move our body, centrifugal and gravitational forces, among others, supplement this information in real time. For VR, this sophisticated sensorium of information from our neurons represents one of the very great challenges. The problem for virtual reality is not the types of recordings available, but the playback devices.

The smallest differences between impulses from the head movement and impulses from the optic nerve that are not one hundred percent synchronous can cause the greatest physical irritations. Oculus claims to have reduced this delay to a few milliseconds, an acceptable level, for buyers and wearers of its VR goggles.

However, the question of how to deal with a person wearing glasses sitting on a chair virtually riding a roller coaster in a 360-degree video is still largely unresolved. The body remains stable and static. Storytelling, visual cells and at best head movement signal the exact opposite to the brain.

Research soberly summarizes the result in the illustrative catch-all term cybersickness. Cybersickness is when you embark on a virtual adventure and unexpectedly encounter your half-digested lunch in real time.

Malicious contemporaries might suspect that this is one reason why the manufacturers of VR technology do not currently publish exact values for the studies they commission on this subject with test subjects.

Man is finite. Space is infinite. Virtual reality has to follow this law. In doing so, it can learn a lot from the game industry. There the player moves interactively through seemingly endless worlds of experience.

Because no reasonable game studio can represent the whole world in its variety in program codes and wants to do so for economic reasons, subtle tricks are used to reduce the space options. VR and 360 videos will benefit from this. Tomorrow, maybe the day after. Today it is still: wait and see.

Storytelling must be reinvented for VR

Content and technology often go hand in hand. This is especially true for virtual reality. Classic games cannot be successfully adapted to VR, not only because of cyber-sickness. The VR industry has therefore challenged the game industry to develop content that respects the three laws of VR (3-D, motion, and room size) and meets a number of other requirements. The most important of these are:

As in interactive games, the traditional cinematic vocabulary cannot be applied in virtual space. In real life, there are no visual cuts, no sudden changes of space, close-ups or long shots. In storytelling, the audience is therefore guided more by the rules of a theatrical production than by classic Hollywood cinema.

Banal, but difficult to implement. How and where does the experience-adequate entry or exit take place in virtual reality? In which way can the most important “signposts” in the virtual space be set without them being disturbing. How can the virtual journey be interrupted, saved, continued or enriched with additional information? So far, there are examples but not yet industry practices or guidelines that are almost certain to be adopted by a wide audience.

Virtual reality using the example of Henry the hedgehog

Henry the Hedgehog actually belongs in the preceding category of storytelling. But Henry’s story is so interesting to Virtual Reality that it deserves its own paragraph here. Oculus was famously bought by Facebook. With that, it was time to think around the corner and see if VR could be used to substitute the classic storytelling of cinema and TV with a much more powerful experience. To that end, they’ve poached a creative mind from Disney’s premier animation studio, Pixar. The latter was commissioned to develop and produce a film especially for VR. 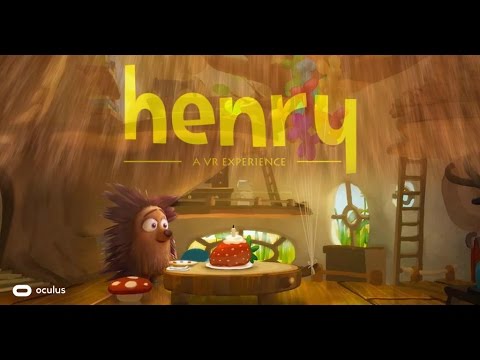 That was the birth of Henry the hedgehog. Henry has spikes. And therefore no friends. Saschka Unseld, who was responsible for the film with Oculus Studio, can be quoted on the learning from it with the following statement: “In the storyboard, many scenes looked funny, but in the virtual environment they seemed depressing for the viewer.”

The viewers apparently felt a much greater closeness to Hedgehog Henry in virtual space than the filmmakers expected. They did not laugh at the fate of Henry, but felt pity for him. In the end, Unseld therefore dispensed with a whole series of planned scenes in the finished film.

Waiting for the killer app

In the case of VR, however, so-called adult entertainment is experimenting less out of enthusiasm for the new possibilities of 360-degree video than driven by the financial need to once again tap into new revenue streams.

You can already make big money with VR (virtual reality). But not with technology, nor with content and storytelling. But with the glasses made of cheap cardboard, thanks to which you can put your own iPhone with apps on your nose with little tinkering. Since the New York Times sent 1.6 million (!) of them to its subscribers and at the same time produced videos from the fight for the American presidential election, the cheap glasses have become internationally trendy. The masks made of cardboard are offered depending on the number of pieces, mostly printed with various logos of sponsors, between 12.- and 19.- dollars.

The high-tech glasses from Oculus wander over the counter for 700.- USD. How high the profit margin is is not communicated. In the case of the cardboard glasses, experts estimate the difference between manufacturing cost and retail price to be a whopping %.

If you want to move through a virtual reality: It’s called a video game, it’s been around forever.
James Cameron, director

Currently, only one genre is compelling in VR. The 360 Animation. For the moving image, it has the potential to break boundaries and inspire viewers.

The future of virtual reality

Virtual reality is coming. Someday. Sort of. That much is certain as the progress of science. Today, we still need clunky glasses to consume virtual realities. Tomorrow it’s contact lenses. The day after tomorrow, the industry will be able to use moving images, not just pictures, with electromagnetic stimulation to create storytelling directly in the viewer’s brain, taking escapism to unheard-of dimensions. Then it gets really interesting.

Against this backdrop, giants Facebook and Google’s plans for VR seem almost suspiciously unspectacular. “Zuckerberg and himself believe that the mass market for virtual reality lies in the ability to put people into virtual spaces together,” Palmer Luckey, the founder of Oculus Rift, says in an interview with Der Spiegel. Virtual conferences no longer have much to do with storytelling and VR 360 video in the original sense.

Two billion was paid by Facebook to acquire Oculus. The giant is betting this future technology. He plans to use VR to do nothing more and nothing less than trigger a revolution in how people communicate with each other in the future.

The future will show whether this vision manifests itself as reality. Or whether the technology will not end up in the mothballs of unjustly hyped trends.

Google, however, is innovative and aware of the problem: the company wants to hold a competition for the new YI HALO 360-degree camera promised for the following year.